Lessons to be learned from Buffett’s mistakes

He describes his investments in his 2008 Annual letter to shareholders quite frankly:

I made some other already-recognizable errors as well. They were smaller, but unfortunately not that small. During 2008, I spent $244 million for shares of two Irish banks that appeared cheap to me. At yearend we wrote these holdings down to market: $27 million, for an 89% loss. Since then, the two stocks have declined even further. The tennis crowd would call my mistakes “unforced errors.”

Buffett invested in AIB and Bank of Ireland. What he did not expect was the banks to continue to lose significantly more over the coming years. The charts are below: 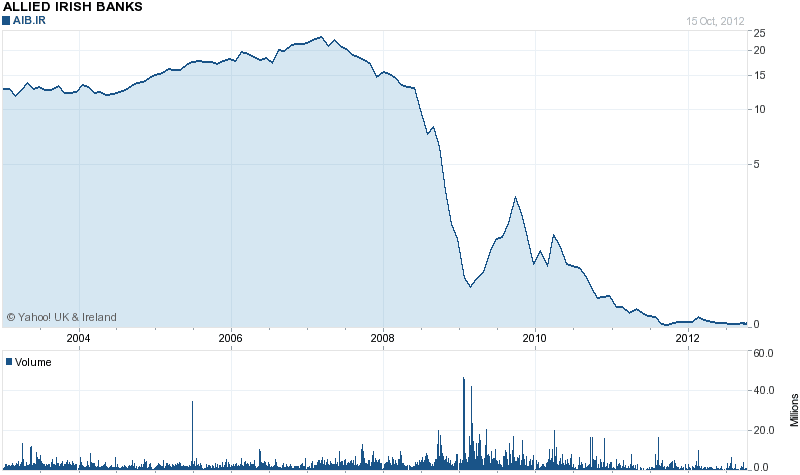 And Bank of Ireland: 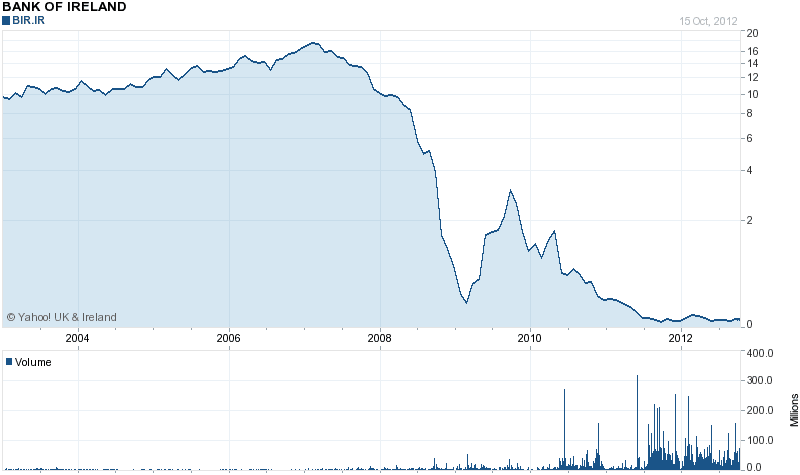 Whilst the property bubble in Ireland was characterised by greater oversupply of houses, there are some characteristics that can be juxtaposed against Australian banks.

1. High national mortgage debt to GDP
2. Prized high return on equity
3. Prized dividends
4. Strong bank fundamentals
5. Belief that population growth propped up housing markets.
6. Government believed there was no downturn coming due to the strength of their economy due to associated neighboring countries economies

3. From the Chairmans letter we see a statement regarding dividends that would sound familiar to Australian bank investors:

This outcome continues AIB’s proud record of growing its total dividend every year since 1993.

It is reported that the dividends are the reason our banks are rapidly increasing in price. Relying on this metric did not turn out too well for the Irish bank shareholders.

4. Strong bank fundamentals were common for the Irish banks.

The profit growth in a slowing economy as people continue to borrow more despite a looming slowdown. AIB grew at 14.9% in 2007. Bank of Ireland grew at 22%

Many financial experts brag about Australia’s prudent lending practices. Whilst our regulation is amongst the highest standard in the world, lending prudence is dependent on the valuations of the assets they lend against. A 80% LVR (considered fairly conservative) against an asset which is 40% overvalued is the equivalent to a 112% LVR on the fair value of the asset. Whilst the fair value of an asset is not a fixed number, I would suggest that house prices are highly unlikely to be considered by most as undervalued and very few would even consider them fair value. How far overvalued they are is highly contentious, however the fact that there is considerable debate suggests that they are likely over valued.

6. Ireland was dependent on its neighboring countries for economic growth. Australia is also dependent on China, Japan and Asia to continue their mercantilism. I would tend to agree more with Hugh Hendry that this Asian export dominance has its limits.

There is one big difference between Ireland and Australia. Australia maintains its own currency and so can devalue it if we have a significant decline in our economy. This is proving to be difficult for the RBA at present, however there is a point if interest rates fall low enough that overseas buyers lose interest in our debt and cash. This loss of interest may be fairly sudden with a corresponding fall in the Australian Dollar and is one of the reasons we have a larger than usual exposure to international assets at present for our clients.

The problem with Australian bank share holders is that they have not invested $200 million of a 200 billion portfolio as Buffett did. This equates to 0.1%. Australian investors have invested 30%, 40% and even over 50% of their portfolios. This is basically a bet that Australian mortgages will continue to increase at a rate above wages for an indefinite period and there will be no unemployment rise for the foreseeable future.

Numerous Aussie SMSF’s have not only put a very sizable chunk of their retirement assets into bank shares, they have also become yield obsessed and have dived into the bank hybrids. These investments are more equity than debt and I have seen portfolios with 35% bank shares and 20% hybrids. The holders of these portfolios believed that they were being conservative. They could not have been further from the truth. By using the experiences from Ireland and numerous other nations, it is possible to imagine a scenario where these “conservative investors” lose significant amounts of capital.
I must stress that I think that the Australian property market is more likely to have a slower grind rather than a crash. I believe that we will experience flatlining or gradually declining prices over the coming years. The potential for a crash is not a negligible probability and is definitely not something to be completely ruled out. With one of the highest mortgage debt’s in the world, the potential for significant increases in house prices is a low probability. Limited upside, significant potential downside. Not what you want when you invest.

Dont ask your barber if you need a haircut. Also be wary of anyone who has a vested interest in propping up the property market. Fairfax, Newscorp, property developers, realestate agents and those who have debt to their eyeballs have a vested interest in keeping the property market bubbling. They may right and the market may keep rising, but it is never wise to put much emphasis on those talking their own book.

Realestate.com.au (REA group) has a larger market cap that Fairfax. Spruiking the property market is a very profitable game. Dont think for a second that the big newspaper companies are not trying to keep the excitement in the market.

The whole point of this blog is that a bank is based on its equity. If the equity is based on an underlying asset that is significantly overvalued, then falling asset prices can destroy the small amounts of equity that the banks hold.

Those blindly obsessed with yield have very little idea of the risks they are taking.

If you disagree with the notion that Australian house prices are overvalued, then by all means invest in bank shares, but I still recommend you limit your exposure to 1% to 2% per bank and a maximum of 10% total. This maximum of around 10% of a total portfolio includes bank hybrids and indirect holdings through index funds and managed funds. Personally I believe that Australia still has more headwinds than tailwinds over the next few years and with the baby boomers retiring I think that there is far more downside than most have factored in.

Predicting macro economics is an inexact science. I have my views, however over the last 6 months, I have been wrong. We are still making money for our clients, however we have been expecting a greater slowdown in China than has yet happened. We are still expecting further pain at some stage. If we are correct and China’s miracle economy is proved a poor model, (building empty buildings and infrastructure) then Australia is likely to have a less than stelar outlook. At this point in time, Western Australian, Northern Territory, Queensland may show some increased mortgage pain. Add this to Victoria’s current over supply predicament and we have a recipe for poor returns for our banks.

Beware the investment activity that produces applause; the great moves are usually greeted by yawns.

Nothing in investing in certain. I spend all my time attempting to find investments that have limited downside and significant upside. I think the Aussie banks offer the opposite to what I am looking to invest for clients.

Like our blog?
Sign up to our monthly newsletter and get the latest Valor news and investment advice straight to your Inbox.